Located in the southern end of New York's Westchester County and just north of the New York City borough the Bronx, New Rochelle stretches out over 11 square miles and has around 78,000 residents. A historic city with extensive coastline along Long Island Sound, New Rochelle is also one of the most desirable cities in the United States to live in, according to 24/7 Wall St. and other publications.

One of the main reasons New Rochelle is considered an ideal place to live is because it is considered one of the safest places in the U.S. Its crime rates rank far lower than the national average, especially in regard to violent crime reported. On a scale of 0 to 100, with 100 being the best, 24/7 Wall St. gave New Rochelle a crime score of 91.9.

While New Rochelle is one of the safest cities in the country, law enforcement there, including Police Commissioner Patrick Carroll, wanted a video surveillance solution to aid their efforts. In 2012, the city put out an RFP asking for options. At the end of the year, New Rochelle authorities selected New Jersey-based LTW to lead the effort and install an oversight solution in key areas of the city.

Starting in 2013, New Rochelle had 25 video cameras in 18 different locations across the city, primarily by parks, schools and main roads. That number has since gone up to about 45 cameras in 21 spots as of September 2015, including on the municipal waterfront. Pete Lutz, Vice President of Government and Safety at LTW, noted that most of New Rochelle's cameras are in the southern and downtown areas of the city.

New Rochelle uses both pan-tilt-zoom (PTZ) and fixed point cameras from Axis, with signals from the cameras distributed through radio via Firetide technology. Lutz noted that the city implemented a few HD cameras in 2015 as well, providing police with even clearer video. New Rochelle started off using Firetide HotPort 6000 series nodes to underpin their video surveillance network, but they have since upgraded and are primarily using HotPort 7000 wireless mesh nodes in 2015. The city also, as of September 2015, uses Firetide Mobility Controllers at most of its install sites. The city also uses a video management solution from Genetec. 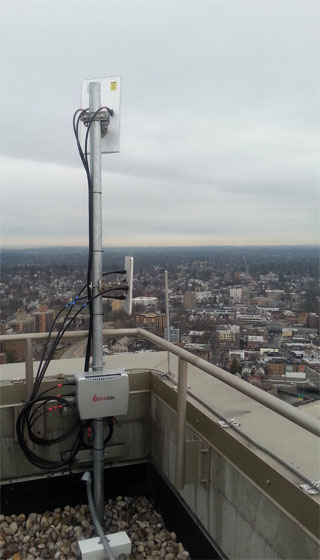 Layout and design of the network

Most of the video cameras in New Rochelle are on electrical poles, although the city has a few endpoints on the top of some of taller buildings. Relying primarily on electrical poles provides New Rochelle with a number of key advantages. For one, the city or the county already owns this infrastructure, eliminating legal and leasing arrangements necessary for building-based implementations. It also ensures that each camera and wireless node has readily available power access.

Furthermore, for officers in the field and those watching the feeds at police headquarters, installing cameras on electrical poles gives them a clean line of sight in all instances. Poles are often installed at the same height with few items in between each one, enabling the police department to have unencumbered views of key sites and intersections.

New Rochelle uses a linear mesh network arrangement. Typically, cameras all along one road are part of one network, with police HQ at the end of the line. Lutz said the max distance between nodes is around a half mile in New Rochelle, but they typically have much shorter jumps between locations. This network arrangement allows the New Rochelle Police Department to have a clean line of sight, use readily available municipal infrastructure and gain all of the reliability benefits that come with a mesh arrangement.

All video feeds lead back to police HQ, and all video is stored there for 25 to 30 days after it is captured. Since everything is happening on a private network, the video feed is secure – much more preferable to the alternative, which would involve paying a high monthly premium to use the public cellular network between nodes for wireless connectivity.

"Knowing that you have good system and a good integrator makes it so much easier to move forward with a trailblazing system like ours," said Nick Massaregli, Senior Systems Engineer of the New Rochelle Police Department's Technical Services Unit. "Broadcasting [close to] 50 concurrent video streams through a wireless system is no easy task, and I was extremely pleased with the video quality and network's smooth operation."

How the city benefits from video surveillance

New Rochelle police officers have benefited immensely from the video, readily using cameras to assist in sting operations and to investigate crimes. The video feeds have also been instrumental on numerous occasions in allowing police to more quickly spot crimes as they are occurring and take more immediate action to arrive at the scene in a timely fashion.

"In some cases where they haven't had video in the past, like in the port district area where they have all the boats, the guys down there love it," Lutz said. "Most of the officers are well in tune with the locations of the cameras and they use them. They use them to be proactive about investigations and sting operations. They use them for retroactive investigations, for things that happened yesterday or the week before. They'll go back and they'll research video from a certain time of day and camera, to see what they can find. Obviously if in fact there is a homicide and there's something that happens in real time, they have cameras to go to and the feed to go to look at and to respond quickly. So for the department, the network and the surveillance solution has been received well by the officers."

Lutz also noted that video surveillance in general has proven to be a boon for business in many past deployments, especially in higher-crime areas. By installing video in areas where criminal activity had previously been rampant, people in the area often feel safer and are thus more likely to frequent shops in that part of town.

Plans for the future

New Rochelle has already seen great benefits from video surveillance and is aiming to expand its use of this technology in the coming months and years. In the first two years since it was initially implemented, the city has already expanded, and is prepared to cover other areas of the municipality that are currently not covered by video surveillance, according to Lutz.

In addition, New Rochelle is planning on further using the Firetide Mobility Controllers already in place to stream video feeds directly into patrol cars. That way, officers would be able to see what's happening in a certain area before arriving at the scene. The city hopes to have this in place in 2016.

"The New Rochelle Police Department is one of our first customers to successfully roll out such a large footprint of wireless mobility," Lutz said. "Through a series of links to the Network Video Management server in the head end, patrol vehicles can access video and data from the network, capabilities which most police cars on the street simply do not have."

New Rochelle was already known as one of the safest cities in the U.S., and the video surveillance system put in place in 2013 ensures that the community remains a safe place to live, work and shop. With a Firetide mesh network underpinning the cameras, the New Rochelle Police Department can rest assured that the video feeds are reliable and effective under just about all circumstances.